The original MP5 submachine gun (Maschinenpistole 5), chambered in 9×19 Parabellum, is one of the most infamous, recognizable SMG platforms of all time.

It has been in production consistently since 1966 and has since seen prolific, widespread use around the world. Law enforcement, paramilitary, and militaries from over 40 countries and countless constituent groups have carried the MP5 or some variant. It has seen official service in upwards of 15 high-profile international conflicts.

Over 100 variants and MP5 clones have been produced, and the firearm is so popular that when the UMP was released in 1999 with the intention of replacing it, the MP5 remained (and generally still remains) the more popular option.

Given its popularity, this sort of begs the question, why are there so few MP5s for sale in the U.S.? Among other questions. Here’s what we have to offer.

Why Are There So Few MP5s for Sale in the U.S.?

Another reason could be that the process of acquiring an NFA weapon is so laborious.

It is a common misconception that “machine guns” and fully-automatic rifles are illegal in the United States. Though not categorically illegal, they are, however, heavily regulated by the ATF under the National Firearms Act of 1934, otherwise known as the NFA. (Also some states have outlawed them).

The NFA requires all regulated weapons (see the ATF’s official website for the full list of designations) to be registered. Purchasing one requires an individual to fill out an ATF Form 4, Application for Tax Paid Transfer, and Registration of the Firearm. The process is time-consuming and expensive.

So, as one might expect, the difficulty with which the process must be completed has had a commensurate effect on demand.

So what about the pricing of an official MP5 or variant?

How Much Does an Official, Full-Auto MP5 Cost? How About a Semi-Auto?

Due to a variety of factors, authentic MP5 SMGs, which are fully automatic, are remarkably expensive. It’s not uncommon to find them for sale in the range of $30,000. You read that right. Sometimes they sell for more, sometimes they sell for less, though, so don’t take that as gospel. The price will also, of course, depend on age and condition.

There is also a semi-automatic version of the MP5, known as the SP5, which is substantially more affordable, although potentially also limited in supply here in the United States. If you can find one, expect to pay somewhere between 2,000 and 3,000 dollars for one – but again, don’t be surprised if you see higher asking prices.

Note that these estimates are only for official MP5s and variants. There is a wide range of MP5 clones out there that are substantially more affordable and readily available, some of which are different enough from the real thing that they don’t require NFA registration. 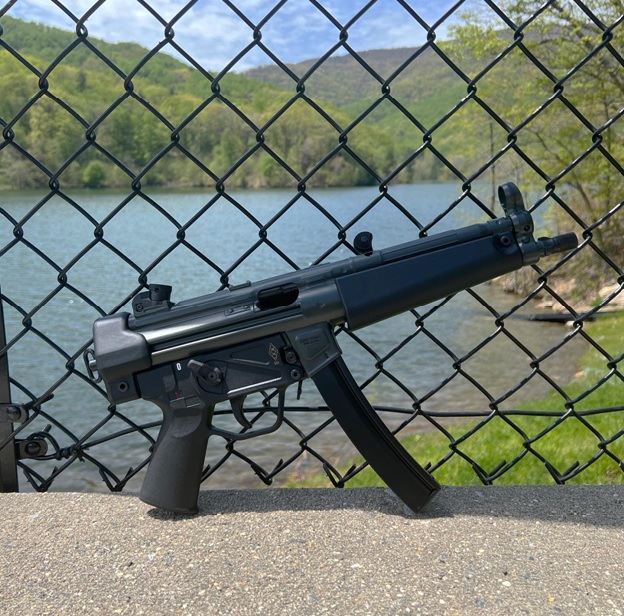 Where Can I Get an American-Made MP5 for Sale?

If you’re looking for an American-made MP5 for sale, you don’t need to look any further.

The ZF-5 is made with pride right here in the United States and features several unique attributes.

One is that, outwardly, it is just like an MP5 in all the right ways. It features the same aesthetics and similar dimensions to the MP5, along with a tropical handguard, manually actuated lever safety, a cold hammer forged barrel, and fixed hooded front sight, and an adjustable rear sight with a rotary drum.

It also utilizes the original MP5’s roller-delayed blowback action, which is reliable, smooth, and most importantly, light on recoil.

Our American-made MP5 for sale comes with a custom 2-point sling, a 3-lug flash hider, 3 30-rd magazines, a carrying case, and a Picatinny rail for optics.

Additionally, on top of being made stateside, the commercial model of the MP5-inspired ZF-5 is not capable of selective fire. It is semi-automatic only, freeing it from NFA restrictions. Fully automatic ZF-5 models are available for qualifying agencies such as military, law enforcement, and those with the appropriate FFL/SOT licenses.

How About MP5 Accessories?

In addition to our ZF-5 MP5 for sale, we also sell a number of MP5 accessories, including but not limited to barrels, bolt groups, flash hiders, firing pins and sears, takedown pins, additional magazines, hardware, and more. Check out our collection via the link above.

Follow Us or Get in Touch with Zenith Firearms

If you’re thinking about getting an MP5 clone or variant, or something similar to our ZF-5, but need more information, keep in touch with us.

*Note: Nothing in this post should be construed as legal advice. If you have any legal questions, please consult a legal professional specializing in firearms law.

2 thoughts on “Answering a Few Questions About MP5s for Sale”

This site uses Akismet to reduce spam. Learn how your comment data is processed.